Institutions are often regarded as one of the ingredients of competitiveness and/or growth rate in economic development.  The discussion on the role of institutions in ‘the origins of power, prosperity and poverty’ got popular attention through Daron Acemoglu and James Robinson’s book, ‘Why Nations Fail’.  The main idea behind the book is that inclusive economic and political institutions promote growth and prosperity while extractive institutions typically lead to stagnation and poverty[1].

Given the importance of institutional quality within a country’s economic development, we had looked at governance indicators in DataTurkey section of LongViewTurkey before (http://longviewturkey.com/dataturkey-governance/). The main outcome out of those data was that Turkey improved in some of the pillars of institutional quality (control of corruption, effectiveness of government between 2002-2012; but there was no significant improvement in rule of law and regulatory quality.

There are some other sources, which bring together data on institutional quality; but they tend to concentrate on corruption:

There is also one another source, which gives more comprehensive data on institutional quality.  In World Economic Forum’s Global Competitiveness Index (released on September 3rd), there is institutional information on 21 sub-pillars collected from WEF executive opinion survey.  As this is the only data that has been collected and released in 2014, we believe it is important in terms of the information it possesses.  Below are some highlights from 2008-2014 data:

Comparative Data: What Happens in the EM World? 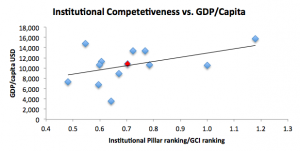