In this post of DataTurkey, we look at international data to question whether there is an entrepreneurial environment in Turkey that stands out as a comparative advantage compared to others.

So how does Turkey differ in terms of enterprise structural indicators compared to OECD averages and to the 14 EMs that we look at? 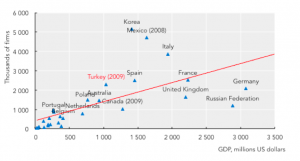 Source: Entrepreneurship at a Glance 2013 OECD (trendline is added by the author)

• As an interesting note, among the OECD countries Turkey has the highest preference of self-employment (80%), compared to OECD average of 40%. Yet, on the question whether it would be feasible for individuals to become self-employed within the next five years, the numbers plunge to OECD averages. 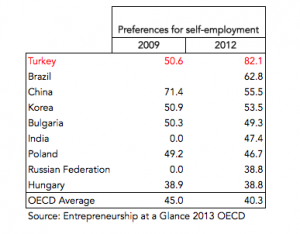 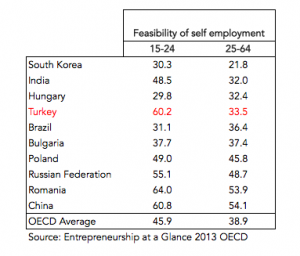 Value added per company is significantly high (low) in larger (micro-sized) companies compared to OECD averages
• Yet, despite the fact that Turkey has a higher portion of micro-enterprises compared to the average, value added of microenterprises is lower than the OECD average and that of largest companies are higher. This means, given one of the lowest number of larger enterprises (as a percentage), the value added per company of this group is one of the highest within the OECD.

• Accordingly, larger companies make a higher-than average contribution to the exports.
• Even though its medium-sized enterprises do not produce a higher-than-OECD average value added, share of this group in exports is above average.

Yet, New Company Registration Is Not High
Despite the high number of enterprises compared to its GDP, Turkey’s business density, which measures newly registered companies per 1,000 working-age population was 0.79 in 2012, one of the lowest within the 15 EMs we look at. 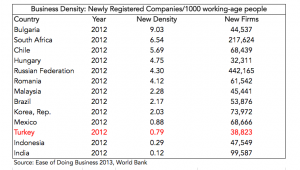 Entrepreneurial Environment
World Bank’s Doing Business index covers 189 countries and ranks business regulations in terms of their easiness for the business community.
• Turkey ranks 69th in the 2014 overall index (top 37%), improving 3 places compared to 2013. In the sub-categories Turkey’s performance varies between 38th ranking to 130th ranking. Turkey ranks the best in enforcing contracts and protecting investors; and the worst in resolving insolvency and dealing with construction permits.
• Compared to 2013, rankings in getting electricity and protecting investors improved the most while rankings in days for starting a business deteriorated the most.

There are also other indices, which ranks the entrepreneurial environment in terms of competitiveness and responding to change drivers.
• In WEF’s Global Competitiveness Index, Turkey ranks 44th out of 148 countries (top 30%). Its best sub-ranking is in local supplier quantity and its worst is in nature of competitive advantage.

• In Legatum’s Prosperity Index, under the sub-category entrepreneurship and opportunity, Turkey ranks 54th out of 142 countries (top 38%). 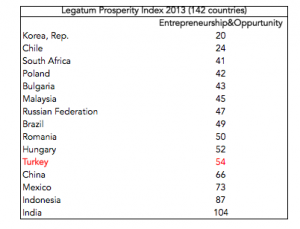 • In KPMG’s change for readiness index, Turkey ranks 19th out of 90 in enterprise capability (top 21%). Within the sub-indices, Turkey ranks the best in economic diversification and the worst in depth of financial markets.

Results:
• Turkey has a high number of entrepreneurs compared to the OECD average
• Yet, Turkey seems to be unique in the number of micro-sized enterprises, significantly outweighing the average of other countries
• Turkey is also unique in the fact that micro-sized enterprises have a very low value added compared to above-average value added of larger enterprises
• It is these larger enterprises that are the pulling Turkey’s exports
• In the entrepreneurial environment indices, which mostly depend on survey results (hence perceptions), Turkey’s ranking is usually in the top 30%; but in the sub-categories there is a great variation (20-78%) even in related categories, making it hard to pick-out the most problematic areas for entrepreneurship in Turkey.

To put things into perspective, it is best to end with basic facts on entrepreneurship in Turkey, quoting OECD economist Rauf Gonenc*:

1) Turkey is an economy of entrepreneurs, in exceptional proportions.
2) At first sight, Turkey’s entrepreneurial engine operates with only very limited human capital, in small scale and low productivity business units.
3) Nonetheless, a remarkable “entrepreneurial flourishing” has taken place in the 2000s. Throughout the country, small business units tended to become small corporations, and grown into higher scale and productivity levels. This has promoted inclusive growth in Turkey.
4) However, this dynamism has not been supported by the existing regulatory framework, inherited from earlier times. The mismatch concerns principally labour market rules.
5) Policymakers have made important efforts to offset regulatory obstacles to the growth of enterprises with second best remedies. These efforts have paid, and helped growth. But, first best structural reforms appear now necessary to support entrepreneurship across the full spectrum of the business sector.