Dichotomy Between Hard and Soft Data

In its recent publications, Central Bank of Turkey (CBT) has been stating that 1q13 economic activity suggested a marked recovery in domestic demand, stemming from the modest rise in consumption and considerable expansion in investment. Bank also claimed that the recovery is continuing in the second 2q13. Central Bank’s optimistic assessment regarding the pace of economic activity was based on the some early indicators, such as business surveys, credit developments and import data. However, we have been witnessing a dichotomy between soft and hard macroeconomic data since the end of 2011. Due to this fact, making prediction with this kimd of soft data has become more difficult and unreliable.

The surveys sometimes fail to capture the direction and the pace of the recoveries or the downturns, as it has been happening since the end of 2011. While Turkish economic growth rate has been losing pace, manufacturing PMI has remained resilient since the end of 2011. Average manufacturing PMI was 51.6 during 2012, whereas GDP just grew by 2.2% during the same period. A model, which includes only PMI and excludes these outlier periods, suggests that GDP grew by 3.5% in 2012 compared to 2011, given the PMI levels during 2012. Results show that backcasts obtained with a soft indicator tracks the GDP growth relatively weak. According to this model, we calculate 5% year-on-year growth in the first quarter of 2013. 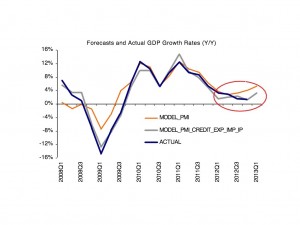 On the other hand, we put together the PMI, banking sector credits to non-financials, export and import quantity indices and industrial production in another model. We find really better and more reliable figures regarding the statistical results. On the contrary, this model shows a weaker GDP growth rate for the whole 2012. We estimate only 1.8% annual GDP growth for 2012, just below the 2.2% actual rate. But, economic activity would have started to recover gradually in the second half of 2012 according to the model, whereas realized figures pointed out that the slowdown continued during the same period due to strong sentiment indices. The model, which covers only the survey data, has been overshooting the actual numbers systematically, whereas large-scale model has been underestimating the economic growth since the beginning of 2012. Besides, the second model shows a 3.5% year-on-year growth in the first quarter of this year.

Reviewing the economic developments and making macroeconomic predictions become more difficult due to recent dichotomy between soft and hard data since the end of 2011. So, we believe that if this divergence continues, it will raise the question marks regarding the pace of the economic activity, and Central Bank’s economic assessments will be criticized more loudly.