During the last 10 years, share of EU and MENA[1] region exports within Turkey’s total exports stayed almost the same at 70% levels; but the 13% decrease in EU’s share was almost all replaced by exports to the MENA region.  Exports to MENA region acted as a buffer to the decrease in EU exports, especially between 2009-2013.  The peak in Turkey’s MENA exports was USD52bn in 2012 when exports to Iran, United Arab Emirates, and Iraq reached new highs. Turkey’s economic relations with the region is not limited to goods trade.  Construction companies have quiet active both in North Africa and Middle East.  Additionally, in the last five years, Turkey residents FDI abroad tripled and reached USD5.2bn in 2014; almost 45% of these investments were made in the MENA region. 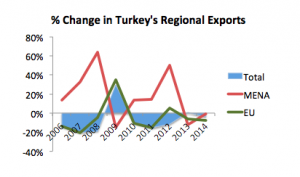 Risks and Opportunities in MENA

Region is politically and economically very diverse.  On the one hand, there are oil exporters[2] with high levels of commodity dependence; and there are commodity importers.  Overall the region ranks low in the political stability and rule of law indices.  The last two years’ political and security issues especially hit the region’s growth rate.

Turkey’s economic relations with the MENA countries show the risks and opportunities of doing business in the region.  Turkey’s exporters benefitted from above world average growth rate in the region between 2009-2012 as they leveraged physical proximity to the region and higher risk appetite (among many other things); but sustainability of these exports markets depends very much on regional political and security issues. As we have witnessed over the last two years, market place for Turkey’s exporters shrunk very fast especially in Iraq and Syria.

Current Setting Is Not Helping

Within the current global setting, there are certain issues, which especially impact the region

1. Oil exporters: Oil exporters in the region will grow slower due to oil price decrease.  In the latest Global Economic Outlook released in January 2015, IMF slashed down Saudi Arabia’s growth estimate for 2015-16 by about 1.5%, one of the biggest cuts among the estimates.  How much each oil exporter’s growth will be impacted is going to depend on country’s ability to offer fiscal buffers and degree of oil dependence as well as the duration of lower oil prices.  Gulf Cooperation Council (GCC) countries are in better shape to carry the burden; still investments in the region are to be impacted. 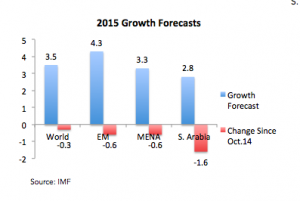 2. Oil importers: Normally, oil importers in the region are expected to benefit from lower oil prices in terms of lower costs in their production process.  Yet, due to high interconnectivity via workers’ remittances, lower growth in Gulf Region can limit positive spillovers of lower oil prices.  Additionally, decrease in GCC financing throughout the region will put pressure on oil importers’ growth as well.

3. Growth divergences and currency depreciation in EM: In the same report, IMF also points out to growth divergences in advanced economies especially between US and EU as one of the main global issues in 2015.  Such divergence will have an impact on MENA countries depending the weight of trade relations; but more importantly USD appreciation is having an impact on the region’s currencies.  Oil exporters currencies are depreciating in countries where currency floats.  In pegged systems, monetary system is taking the pressure but only in countries with sufficient reserves (Saudi Arabia).  In others, difference between official and market prices widen.  Oil importers are not immune from the slide.  Reemerging safe haven behaviour and widening EM risk spreads are putting pressure on all currencies in the region. 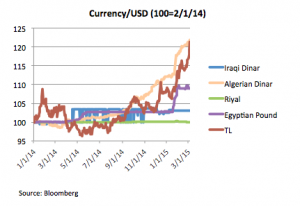 Overall, current trends are working against MENA region oil exporters.  There have been downward revision to growth rates for 2015 and 2016; and MENA region got a hit, led by Saudi Arabia. Current account surpluses are expected to decrease throughout the oil exporters due to deterioration in terms of trade. Fiscal space is expected to narrow down as well.  Apart from the oil price, political stability and improvement in security issues will determine limits of growth in the region.

Business Prospects in the Region

From a macro perspective, oil price decrease benefits Turkey’s external accounts to a significant degree.  Yet, low oil price for prolonged periods endanger the stability of MENA region that is already not very stable.  Having benefitted from growing goods and services trade with the region significantly in the last years, slump in region’s growth estimates will not help Turkey or any other country/company making business in MENA.  Yet, the last two years has been so volatile on the political front that any kind of moderation is going to make a difference in region’s economic growth and trade volume.  After all, region is still expected to grow 2.3% more than the advanced economies and 2.9% more than the Euro Area over the next five years.  For companies making business in the region, key seems to be jumping in at the right time of the political and economic cycle.  Turkish companies were good at that between 2005-2008 and 20010-2012.  A lot will depend on how Turkish companies are perceived in the region and whether Turkish exporters will respond to that perception in their usual high-risk taking attitude. 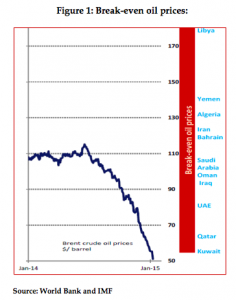