Along with several other ambitious economic targets, Turkey set a 500 billion USD exports target for the year 2023, the 100th anniversary of the modern Turkish Republic. In policy documents prepared to this end, number of exporters and export destinations are often cited as main dimensions to focus on[1]. However, a cross country comparison reveals that it is the average size of exporters that might be restraining Turkey’s export volume rather than the number of exporters or export destinations.

Utilizing firm-level export data of 10 developed and 35 developing countries, the World Bank’s Exporter Dynamics Database[2] allows us to examine associations between export volume of countries and several components of exports at firm-level. 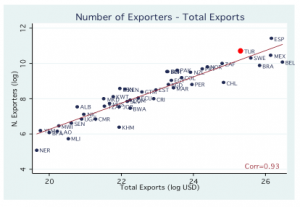 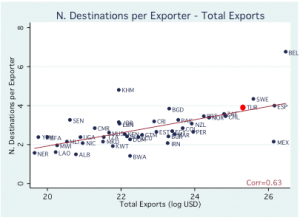 iii. Average Number of Products per Firm (NPF): A Turkish exporter, on average, exports almost 10 different products, defined at HS6 level[3]. As Turkey is well above the regression line, we conclude that there is not a problem with product diversification at firm-level. 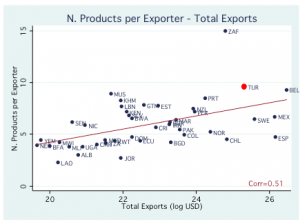 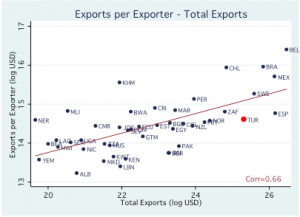 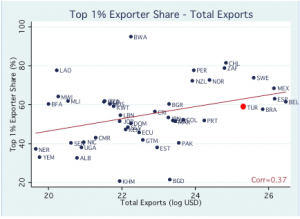 Using a simple methodology, this Note argues that small exporter size in Turkey might be a serious problem preventing the country from exporting more. There are 2 main mechanisms underlying this argument:

2- Market power and hence the ability to determine prices and other conditions of trading are lower for smaller transactions.

Unfortunately, increasing exporter size might be a more difficult task for Turkey than it initially looks. This is because not only the average exporter size but also the average firm size (measured by employment or total sales) in Turkey is very low relative to many other countries[4]. This implies that effective export policies should be based on overall structure of the economy and not stand-alone.

[2] Available at http://data.worldbank.org/data-catalog/exporter-dynamics-database. Graphs in this Note are based on averages of 2006, 2007 and 2008 stats.