Domestic demand’s rapid growth and the decoupling between domestic and external demand raised the current account deficit significantly in Turkey since 2010. However, developments in terms of trade (TofT) independently affect the external deficits as well. This note analyses analyses the impact of terms of trade on Turkey’s current account balance.

In addition to decoupling between domestic and external demand conditions, the deterioration in terms of trade impacted the current account deficit in 2011. The Central Bank of Turkey pointed out this issue in the first box of the Balance of Payments Reports 2011-II, and released the results of their exercise. We revisited their methodology and recomputed the terms of trade affect on current account balance with 2010 based new foreign trade unit value indices. We have made two important assumptions: First of all, the terms of trade figures recorded in 2010Q3 have not been changed and the level recorded as approximately 100 was maintained throughout 2011 and 2012. Secondly, the constant level of terms of trade would have no impact on supply and demand conditions. 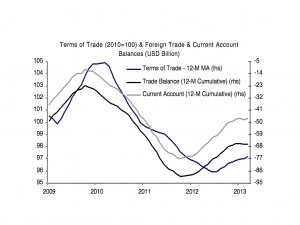 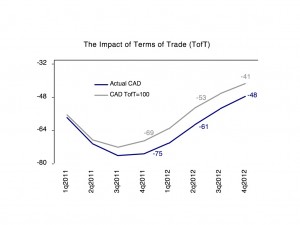 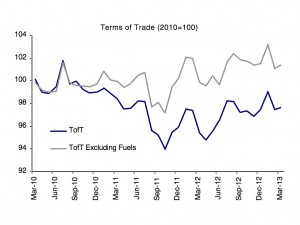 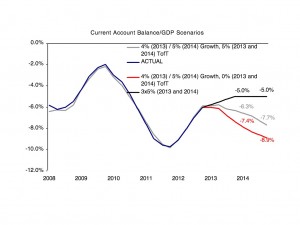 In accordance with a long-term view, market and product diversifications in both export and import, and bilateral trade agreements may be the policy options leading to the structural improvement in terms of trade, and hence the resilience of economic structure. Otherwise, Turkish current account balance is going to be vulnerable to short-term fluctuations in international energy and other commodity prices.