IS THE IMPORTANCE OF LABOR STATISTICS RISING IN TURKEY?

Policymakers, especially the Central Banks, generally take into account the price stability while setting policy. Employment and unemployment are only the part of reference set of policy frameworks. But, there is a new noteworthy trend in policymakers’ decision making practices, which was primarily realized by the US Federal Reserve (FED). Labor market conditions and policies including its social costs may be put into practice by other countries in the next few year as Kemal Dervis noticed in his recent article published by Brooking Institute (‘Should Central Banks Target Employment’, Kemal Dervis, Brooking Institute, December 19, 2012). Although discussing such a policy priority change is really early for Turkey and probably for any other emerging market, there are some statistical evidences that make us to take notice of the emerging relationship between labor data and other business cycle indicators.

In Turkey, economic agents are usually skeptical to labor statistics. The weak data quality and hence weak statistical relationship between labor statistics and other business cycle indicators are the main reasons behind the doubts even though the data quality has recently progressed compared to the previous decades. During 1988 and 1999 period, TURKSTAT, Turkish Statistical Institute, had released the household labor force data biannually. Besides, details of figures were poor. Between 2000 and 2004, TURKSTAT released those data quarterly. Since 2005, the Institute has been announcing the detailed figures monthly. Additionally seasonally adjusted figures are also announced now. Despite these developments, labor statistics are still being released with a two and a half-month-lag, which is still late among advanced and emerging economies.

More importantly, there have been some fundamental evolutions in the structure of Turkish labor markets. Almost the half of employment had been hired in agriculture sector two decades ago. But, the share of agriculture in total employment declined to 24,7% in the last five years, while the shares of services and industry, which are more sensitive sectors to general economic outlook and output fluctuations, increased to 55,5% and 19,8%, respectively, in the same period. This sharp shift has become more pronounced since 2000’s and has been supported by the migration from the rural side to the big cities.

These institutional and structural improvements seem to be sufficient for supporting basic economic principles that propose the relationship between labor statistics and other business cycle indicators. In theory, changes in employment of factors of production provide one of the sources of growth in real gross domestic product (GDP). We would then expect high GDP growth to be accompanied by declining unemployment rate. So, there must be a negative correlation and a relationship between the change in unemployment rate and real GDP growth.

Aforementioned structural change raised the correlations between the change in unemployment rate and real GDP growth rate step-by-step in the last thirty years. The responsiveness of unemployment to output has increased over the last ten years. Institutional reforms and increased elasticity in labor markets have been also supporting these dynamics. In 1983 – 1992 periods, there was a really low correlation among the two data set. In the second term, correlation rose to 41%, which was still negligible. In line with the change of pace in data quality and structural developments, the correlation increased to a significant level of 84% in the last ten years. This negative correlation states that unemployment rate rises as growth rate declines, vice versa. 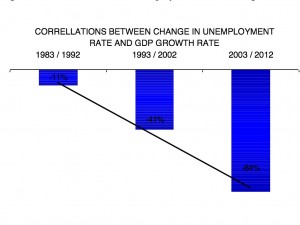 We estimated Okun’s Law equations with both annual and quarterly data. The results are summarized inside the box at the bottom. While the coefficients and the equations are statistically significant, they are not yet robust models consistent with low R². So, it is really early to make detailed conclusion according to these models and poor data.

In conclusion, labor statistics have become more sensitive to general economic fluctuations due to the institutional and structural improvements since 1980s. So far, statistical results show the meaningful (but not robust yet) relationship between the unemployment rate and gross domestic product figures, coherent with the economic theory. In fact, taking into account the labor market conditions in monetary policy decision making process as a priority is premature in Turkey. Still, we will probably have to give more importance to labor statistics in the next few years from now. 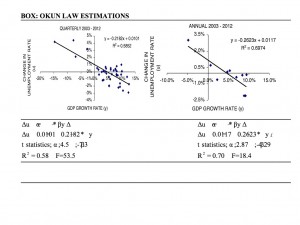