Turkey’s average GDP growth rate was 3.1% during the last three years, compared to 2002-2011 average of 5.5%.  GDP/Capita has been hovering around 10,000 dollar since 2010, fuelling the discussions whether Turkey has been stuck in middle-income trap.  More importantly, the next two years growth estimates are not signalling an improvement over the last three years’ average or the potential growth rate. 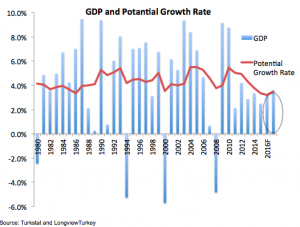 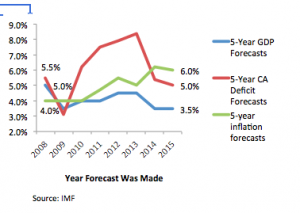 The 10th five-year development plan, published in 2013 identifies supply side bottlenecks as well as some macro problems for this deteriorating balance and maps out a solution plan accordingly.  In addition to labor side and R&D development proposals, Plan also identifies the decreasing savings ratio in Turkey as a problem and proposes incentive schemes to increase private savings; albeit bypassing policies to control private consumption.

Since the Plan was introduced in 2013, main problem has been that diagnosis and suggested policies have not met with political will; or political will that turning into action.  Higher political noise domestically and increasing financial market turbulence globally seem to have narrowed down the playground for reforms and policy implementation until after the elections, at best.

What If Turkey is De-Industrializing Prematurely?

As elections are near and hopes of re-vitalized reform agenda are rising after the elections, it might be a good time to evaluate Turkey’s chances of policy success in raising the growth rate.  Once (and if) the political noise is out of the way, will the ground be clear for a sustainable and more balanced growth pick-up?

Premature de-industrialization is a term used by D. Rodrik[1], pointing out a malaise in developing nations of becoming service economies without having had a proper experience of industrialization. Rodrik argues that as a result of trade and globalization of supply chains, developing nations are exposed to relative prices trends earlier than economic theory would suggest.  As relative price of manufacturing are squeezed in developing nations, technology transfer and employment increase, which would enable income increase, are interrupted.  As a result share of manufacturing both in GDP and employment start falling in developing nations, even before they reach a saturation point.   As the most dynamic sector contracts prematurely, probability of the economic growth potential and the possibilities for convergence with income levels of the advanced economies falls. Even if it is not shrinking manufacturing, which is the problem; but the increasing portion of services (i.e. post production services, design, research) within the manufacturing, the outcome is still that employment absorption and income transfer capabilities of the sector are falling.

The recent figures on the weight of the manufacturing sector points out that Turkey might indeed be under the threat of premature de-industrialization.  From around 20% of GDP in 2000, weight of manufacturing sector within the economy fell to 15.3% in 2013, pick up to only 15.8% in 2014.  The manufacturing sector employment within total fell from 20% in 2008 to 18% levels in the last four years.  In other words, Turkey is contracting in the sector in which technology transfers are highest and income convergence is fastest. 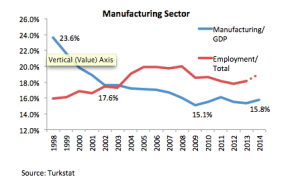 If global relative price pressures are going to prevent further manufacturing investments in Turkey, how is it going to be possible to transfer technology that would increase its competitiveness, increase employment and raise the income levels in Turkey? Is the 10,000-12,000 dolar GDP/capital level that Turkey hit in the last 4-5 years, a result of slow down in manufacturing sector investments?

The 10th development plan actually points out that weight of manufacturing sector in Turkey needs to be brought up.  Even the annuity tax, which was announced by the government at the beginning of the year and then pulled back, was originally part of the plan to channel investments into more productive areas.

Yet, in a global environment where accelerating growth via industrialization may no longer be possible (as much as before), countries will need to find ways of getting competitive on service sector as well.  In Rodrik’s words, ‘making service sector competitive is trickier than making an industry competitive because it would need more accumulation of economy-wide capabilities in the form of human capital and institutions[2]; and that kind of accumulation tends to be slow’.

Assuming that growth via industrialization has hit global limits and developing countries will differentiate on their success in the service sector[3], countries need strategies for the service sector competetiveness in order to accelerate growth and overcome middle-income trap. Drag-pull impact of the manufacturing sector will be more limited under this global scenario.  Countries will have to work on policies that will maximize economy and society wide benefits.

Accelerating the competitiveness on services in Turkey will require a wide range of policies from quality of education targeting higher levels of creativity, innovation, and problem-solving skills to labor side policies aiming at higher female and young participation and efficient use of talent, higher and equal opportunity at all levels, especially at the regional level.  Institutional quality will require wide range of policies from property rights and rule of law, to corporate ethics, and accountability.  Getting competitive in services will require policies that will touch upon the intangible sides of the economy and human life in general.

Accordingly, Turkey’s reform agenda may need to be re-evaluated and re-prioritized.  Even though Turkey needs to slow down the pace of de-manufacturing (as the 10th Development Plan rightly suggests), getting the right policies for competitiveness on services also seems to be pivotal under this emerging global trend. As said at the beginning, the last few years performance has not been inspiring on growth front as well as improvements on human capital and institutional quality; but maybe the problem has been that the country is too focused on increasing material sides growth rather improving intangible sides of the economy; Pre-mature deindustrialization trend globally is a reminder that limits of growth might have been reached in Turkey with the current tools, materials, and mindset.  It is time to diversify the ingredients and add some flavor to Turkey’s development.   Here is a re-cap* on how Turkey does on human capital and institutional quality compared to other emerging economies: 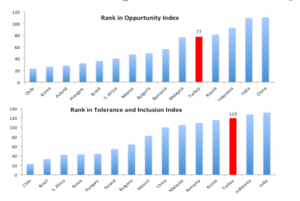 *For detailed analysis, please have a look at DataTurkey section in LongViewTurkey.com

[3] Rodrik argues that ‘even under the best of circumstances, a services-oriented strategy would yield lower growth than what earlier episodes of rapid industrialization had produced for the developing nations’.  (http://rodrik.typepad.com/dani_rodriks_weblog/2014/10/services-manufacturing-and-new-growth-strategies.html)