The Issue for the Turkish Economy

Even before the Gezi protests started at the end of May, the critical question for the Turkish economy was whether the growth was sustainable. Having grown by an average of 5,5% in the past ten years, Turkey has been giving an average current account deficit of 7,3% in the last three years, raising concerns of sudden stop; and hence growth sustainability.

While it is understandable for developing economies to run current account deficits at initial stages, ideally investments geared towards raising the value added of production should help increase exports and reduce the current account deficit over time [1]. Through productivity increases, countries are able to avoid middle income traps. Right now, Turkey is at a critical juncture where internal growth dynamics should come about being and decrease the country’s dependency on capital flows to finance growth. Especially now that there are increasing signs of QE coming to an end, it becomes more critical to assess whether there are seeds of internal growth dynamics emerging, and hence the growth becoming more sustainable.

Another way to ask the same question is using the argument of economic and political inclusiveness, brought forward by D. Acemoglu and J.A. Robinson in the book ‘Why Nations Fail’ [2]. Their observation is that ‘sustained economic growth is almost accompanied by technological improvements that enable people, land and existing capital to become more productive’. Economic inclusiveness is defined as ‘the ability of economic institutions to harness the potential of inclusive markets, encourage technological innovation, invest in people and mobilize the talents and skills of a large number of individuals’. Political institutions are defined as those that are sufficiently centralized and pluralistic. Economic growth and prosperity are associated with inclusive economic and political institutions, while extractive institutions typically lead to stagnation and poverty. According to the authors ‘while it is possible to have economic growth for a while by allocating resources and people by fiat, this process is intrinsically limited’.

So using their terminology, I reiterate my question as such: Was Turkey’s economic performance of past ten years due to increasing inclusivity of economic and political institutions; or was it a result of an arbitrary order following the 2002 crisis and abundance of global liquidity after 2008.

1) Investments Should Lead to Higher Value Added
As one of the factors of production, investment data can shed a light. Are the current investments have the capacity to increase the productivity level? One comment that we can make looking at the aggregate data is that Turkey has to increase level of investments (of around 23% of GDP) to higher levels if the growth rates are to be maintained at 5% level [3]. The bad news is that data does not allow us to make comments regarding the quality of investments. It is an aggregate data, which gives a breakdown only on construction and manufacturing basis but it does not let us understand whether the current investments are just capacity increases or whether they are enabling increases in value added of production in the current sectors as a sign of the sector evolution.

Export data is likely to give the first signs of product diversification (if and when it happens); but so far what exports are showing is that Turkey is diversifying its exports on a country basis, not on a product basis [4].

There is always anecdotal evidence to talk about as well; but it is not easy to reach to broad conclusions based on company based experiences. Specific success stories just tell us that there are companies which are unique in way of doing business [5]; but unless they form clusters, it is not wise to make macroeconomic conclusions.

2) Fundamentals
Other growth drivers can also shed a light an whether growth rate is becoming more sustainable in Turkey. In a recent article [6], Dani Rodrik talks about structural transformation and fundamentals as drivers of growth. Structural transformation is described as birth and expansion of new industries while fundamentals are drawn as capabilities in skills, education, administrative capacity, and governance; basically human capital and institutions. It is argued in the paper that while high growth rates might be possible only with structural transformation, they tend to be episodic if fundamentals do not accompany the other. To quote Hans Rosling, a statistician on the topic, ‘countries, which get healthier first, tend to get wealthier more’ [7].

Considering the last one month’s events in Turkey, it makes more sense to look at the fundamentals, as described by Rodrik; not only because neither the financial sector, nor the macroeconomic indicators were giving any signals on the unexpected social unrest in Turkey (or elsewhere), but also because indicators that financial markets concentrate on is the dynamic side of the growth story with an aim of reaping out the episodic gains.

Comparing Growth, Governance and Social Indicators
Combining what I understand from Acemoglu&Robinson’s inclusiveness argument and Rodrik’s argument on structural transformation vs fundamentals, I drew out a simple exercise comparing social and governance indicators for Turkey versus its growth performance by ranking seven countries’ [8] performances during 2000, 2005, 2012 [9].

First let’s have a snapshot of the current situation of growth indicator vs. social and governance indicators:
1) In terms of GDP growth performance, between 2000-2001, the top performer is India, followed by Turkey, Chili and Korea. The worst performer is Mexico in this category.
2) Among the seven countries chosen here, Turkey has the third highest GNI per capita (2005 PPP international $), shown here as the income index of UNDP.
3) In terms of social indicators, Turkey does not rank as well as the income index except for gender inequality index.
4) In the governance indicators, Turkey never scores as high as third rank as its third ranking score in income index.
5) Best performers in terms of both income index, social and governance indicators are South Korea and Chile. India scores the worst in all of the three categories. 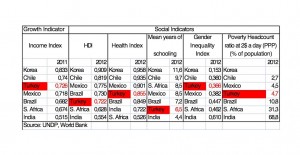 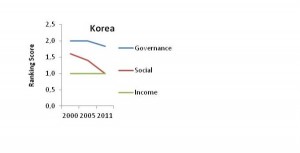 Where Do Gezi Protests Stand in this Equation?
What I calculated here as the difference between ranking of income index and ranking of governance and social indicators may well be interpreted as the ‘lag’ defined by Samuel Huntington. In a recent Businessweek article [10], Moises Naim quotes Huntington with this sentence in explaining the recent protests in Brazil and Turkey: ‘The primary problem of politics is the lag in the development of political institutions behind social economic change’.

So if we go along with the ‘optimistic read’ [11] and accept the improvement in Turkey’s income index as economic institutions getting more inclusive (as in Acemoglu&Robinson’s terminology), the above exercise hints that governance and social indicators were not able to catch up with growth performance, proving Huntington’s lag. Using a combination of arguments listed above, I arrive at the conclusion that unless governance and social indicators improve, i.e. political institutions become more inclusive and/or fundamentals get stronger, Turkey’s growth performance may not be sustainable.

If Gezi protests are accepted as the demands for pluralistic approach in Turkish democracy [12] and reacted accordingly, Turkey can fast-track on political inclusivity, complementing the possible earlier signs of economic inclusivity; hence move along making growth sustainable. As the experiences of other countries show, the difference between growth performance and governance&social indicators is likely to close down in the next ten years. Either growth performance will deteriorate or social and governance indicators will improve. Acemoglu&Robinson argue that history always unfolds in a contingent way. Using the energy behind the Gezi Protests to improve governance and social indicators can still be Turkey’s contingent way of solving growth sustainability issue. Turkey’s (and hence the Turkish economy’s) current challenge is to evolve the mindsets, who see the Gezi Protests as a threat rather than an opportunity.

[1] Turkey’s Sustainability Issue After the Rating Upgrade Part I, LongViewTurkey.com
[2] Daron Acemoğlu & James A. Robinson, Why Nations Fail, Profile Books Ltd, 2013 (p.77, p.79, p.80, p.91, p.94)
[3] Turkey’s Sustainability Issue After the Rating Upgrade Part II, LongViewTurkey.com
[4] How Successfully Have the Turkish Exporters Been Linked?, LongViewTurkey.com
[5] At the EBRD Annual conference in May 10, 2013, in answering a question on which sectors are attractive for private equity in Turkey, Seymur Tari of Turkven Private Equity responded that they invest in way of doing business in specific companies.
[6]Rodrik D., ´The Past, Present and Future of Economic Growth´, Global Citizen Foundation, June 2013
[7] In a 2009 TEDTalk titled ‘Stats that Reshape Your Worldview, Hans Rosling shows that before the growth miracle started in Asia, countries’ social indicators on life expectancy, health and education improved first.
[8] Limiting the comparison to six countries might create biasedness problems. I tend to extend the dataset as to include more emerging countries within the dataset of LongViewTurkey within the next weeks.
[9] South Korea is also included in the last a developed economy to provide a benchmark for the rest. The choice of Korea within the developed nations rests on the argument that it is cited as one of the two countries among Asian growth miracles with political inclusivity (the other is Taiwan).
[10] Moises Naim, ‘In Brazil, Turkey and Chile, Protests Follow Economic Success’, Businesweek, June 27, 2013
[11] In a blog post ‘The Road Ahead for Turkey’ in ‘Why Nations Fail’ on March 6, 2013, Acemoglu and Robinson comment that Turkish economic performance with an optimistic read (among the possible other arguments that exist) is a sign of economic institutions becoming more inclusive, starting a virtuous positive cycle.
[12] For different perceptions regarding the Gezi protests, you can refer to selective readings in LongViewTurkey