What IMF Forecasts Tell Us: More of the Same

In an article dated January 24 in LongViewTurkey (http://longviewturkey.com/turkeys-monetary-policy-from-a-comparative-macroeconomic-data-perspective/) looking  data of 10 emerging economies between 2011-2013, we had arrived at comparative facts regarding Turkey.  Between 2011-2013, Turkey had

The conclusion was that comparing to other EM countries, Turkey has interest rates much lower than implied by its inflation rate. Lower real rates induce import growth, consumption and overall GDP growth rate; but it also seems to spoil the growth mix.  Lower real rates (or the uncertainty created by the interest rate corridor), on the other hand seem to have initiated depreciation of the currency, carrying exports volume higher. Yet, the same combination does not help with the current account deficit, nor with inflation.

Pressure for ‘More of the Same’

After January 24th, CBT increased the interest rates in Turkey via an emergency meeting in an effort to limit the slide of the currency; but since then with the help of improving sentiment regarding emerging markets and easing of pressures in domestic politics, TL strengthened while inflation surged to 8.4% at the end of March 2014, well beyond market expectations.  As expected, the CBT is facing pressures to decrease the interest rates by government officials, not to damage the growth rate further in 2014 and 2015.

If the CBT eases the monetary policy before inflation is clearly on a downward trend, what the Turkish economy will face is probably not going to be different than 2011-2013 period: With a growth rate close or slightly above to market estimates of 3%, inflation and current account deficit estimates will overshoot as the real interest rates of around 0% continue to fuel the bad growth mix; i.e. domestic consumption exceeding the investment growth rate with a good margin. What will be different than 2011-2013 period is that due coming Presidential elections in August 2014 and general elections in 2015, there will be increasing pressure from the government side to fuel up domestic demand while unwinding of FED’s QE process will increase the financial market volatility in the emerging markets, including (and probably the most) in Turkey. Unless the latter threat re-alleviates in the coming months and ‘sudden-stop’ becomes an issue for Turkey, at best we will be stuck with below potential growth rate, structurally unresolved current account deficit, and well-above target inflation rate in the next two years.

The latest country forecasts in IMF’s World Economic Outlook summarizes well the above mentioned point regarding Turkey’s macroeconomic performance: Compared to the previous forecast period in October 2013, the 2014 Turkey growth forecast is revised down to 2.3% from 3.5% while inflation is expected to end the year higher at 8% (versus previously forecasted value of 6%).  In line with the downward growth revision, IMF forecasts that current account deficit will fall down to 6.3% of GDP. Turkey’s five-year growth forecasts, which are probably a good indicator of the potential growth rate is now at 3.5%; as low as it was during 2009 when Turkey was suffering from a severe domestic contraction. 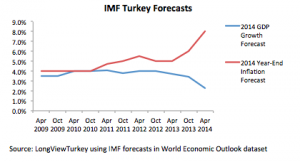 More important than the lower growth forecasts is that forecast set includes higher inflation and current account deficit levels over the next five years.  The graph below shows how IMF’s Turkey forecasts for 2014 evolved over the years. The graph is showing that IMF has grown more pessimistic regarding growth and inflation forecasts over the years; but more importantly, it is showing that certain level of GDP growth in Turkey is expected to generate a higher level inflation as well as current account deficit than before.

What the policy markers can achieve by lowering the interest rates will at best be temporarily and slightly higher but still below potential growth rate and higher-than-expected inflation and current account deficit levels. Clearly, this is not the best path for the Turkish economy over the next five years. 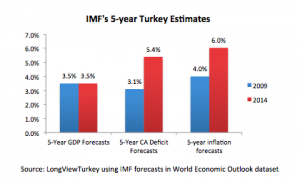